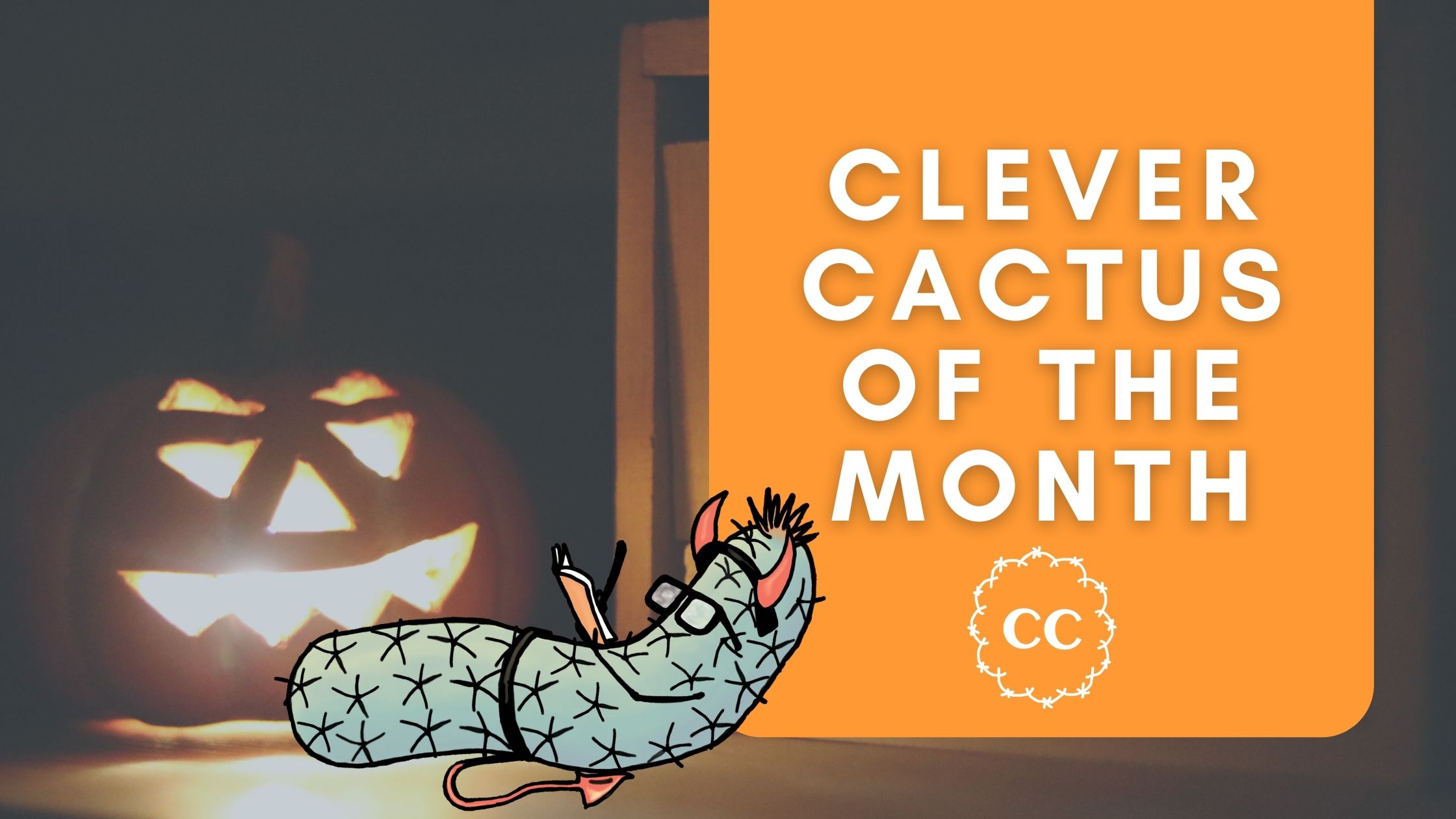 Have you managed to get outside and admire the beautiful autumn colours? We definitely did, a few times – first at a wedding in the “mountains” (or at least what passes for mountains in this area); then again for Canadian thanksgiving. Fall is our favourite time of year, which is why we’re extra sad it flew by

(Seriously, how is it November in around nine days?)

This is, quite honestly, the biggest news we have right now.

We also have a few “things” in the pipeline… but since November is looking equally as busy (if not BUSIER) than October, we’re not going to share what they are. It’ll be a surprise, for everyone. Us included!

Want to know the best part about October being almost over? Halloween! This is the perfect time for our Clever Cactus of the Month to make its debut. This creepy crawler embodies the spirit of Halloween, in a cute way. Just look at it, slithering on the ground!

(Don’t touch it though!)

Our favourite Clever Cactus writer, Laura, is back to tell us all about the Creeping Devil Cactus!

What the devil is that?!

Brilliant, with a side of spooky

The Creeping Devil is practically immortal, with a life expectancy spanning multiple decades. Their longevity is thanks to two key functions: its cloning ability and the fact that it naturally produces mescaline, a hallucinogen.

Sure, the idea of a living species being able to clone itself without scientific interference sounds like it comes straight from a horror movie, but this case is super interesting. The Creeping Devil detaches parts of its stem to rot and die. Things don’t always go as planned, though: sometimes, those pieces come back to life!!! These pieces take root and grow more Creeping Devil cacti. The dead bits that don’t pull a zombie-act decompose and add much-needed nutrients to the soil. So, yeah… not only do its dead come back to life, but it eats itself to stay alive. Yikes!

Ever the creepy crawler, this devil

The Creeping Devil Cactus doesn’t grow upwards so much as it spreads out horizontally – it’s a crawler, typically belonging to massive desert colonies. As it snakes and slithers across the ground, the underside sprouts new roots, anchoring the cactus to the ground and providing access to water hidden under the desert floor.

This crawler has a bit of a soft side, too, manifested in surprisingly colourful blooms during growing season. Its large, yellow, pink or white flowers bloom exceptionally at night and measure between four and five inches in length. Sounds beautiful, right? Except, these blooms erupt like boils randomly across the length of the cactus, peppering it in chaotic, colourful lumps. Ever the Prince of Darkness!

Handle with care… or else

Beware! Creeping Devil cacti contain mescaline, an intense hallucinogenic. You MUST wear gloves when handling these little devils. Ingesting mescaline causes hallucinations and, not to sound dramatic, makes you think you’re being dragged through the depths of hell itself. These hallucinogenic properties fend off critters, but only after said critters have learned (the hard way) to avoid them. Keep this in mind you need to bury the bodies left behind as the Creeping Devil Cactus slithers across your garden.

Every year, it’s the same. Halloween enthusiasts carve the traditional, orange pumpkins with those classically angular Jack O’Lantern stencils, maybe the odd Jack Skellington, or even a “BOO!” if they’re feeling adventurous.

We say it’s time for a change! Play up your doorstep this Spooky Season with this quick, cactus-y craft, inspired/created by Emily Stones (originally posted on Craft Create Cook).

And, you’re done! Settle your new craft into its terracotta pot for the full cactus effect. Let it spook your neighbours with the “Awwws” and squeals of “so cute!” from the trick or treaters!

In a world of pumpkins, be a cactus … a Clever Cactus!